Kombucha Cocktails: A Cutting-Edge Cocktail Fueled By A Culture of Collaboration 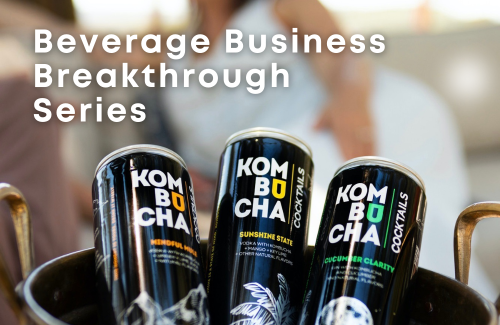 Kombucha is created when yeast and bacteria work together to turn tea and sugar into a fermented beverage that neither microorganism could have produced on its own. Similarly, Kombucha Cocktails would not exist without the collaboration of a unique team of founders committed to bringing their distinct skills together to create a better cocktail experience.

Patrick Donovan, an investment banker; Keith McDonald, a recruitment and retail entrepreneur; and Bo Eaton, a former brewery owner, and distributor, came upon the idea for Kombucha Cocktails after substituting ginger kombucha for ginger beer in their Moscow Mules.

“We were really into fitness, but we liked the full flavor of cocktails like Moscow Mules and Dark and Stormys, which are often loaded with sugar and high-fructose corn syrup,” says Donovan. “We discovered that by replacing sugary mixers with kombucha, we could create a great-tasting cocktail with one-third the calories.”

That exciting discovery was just the beginning of Kombucha Cocktail’s journey to create the award-winning RTD cocktails that can now be found at retailers throughout Florida.

From Pitch Deck to Production

The Kombucha Cocktails team started to share their idea with family and friends and found that a lot of people were interested in trying a new cocktail option that was light and refreshing and contained premium spirits, less sugar, and fewer calories. The continued growth of the kombucha and RTD cocktails markets also served as a source of encouragement for the entrepreneurs to pursue the next steps.

With over 30 years of experience launching and building beverage brands, Jason Kane, Founder of Liquid Opportunities, knows that timing is everything when it comes to launching a new concept like Kombucha Cocktails. “Seltzer brands, like La Croix, prepared the market for the emergence of hard seltzer,” says Kane. “The rise of kombucha across different channels and consumer groups signals the market is ready to accept innovative products like Kombucha Cocktails into the alcoholic beverage category.”

Kombucha Cocktails knew they needed to move fast, but like many innovators, they faced a unique set of challenges that come with launching something new into the market.

“We were one of the first products to combine non-alcoholic kombucha with distilled spirits,” says Eaton. “Kombucha is already in an interesting middle ground between the Food and Drug Administration (FDA), and Alcohol and Tobacco Tax and Trade Bureau (TTB), so getting the right approvals to combine it with liquor took quite a bit of work.”

In addition to spending several months working with the TTB to get their label and formula approved, Kombucha Cocktails also had to prepare their formula to scale for commercial production. This meant, amongst other things, finding a kombucha that could hold up in a can on a shelf for 18 months or more. In search of a non-alcoholic kombucha with a neutral flavor profile, Kombucha Cocktails found one that uses a longer fermentation process to ensure shelf stability.

As the idea for Kombucha Cocktails grew, the development moved from a small kombucha brewer to a flavor house that could help put the product into cans. From there, a pilot facility helped identify the co-packer requirements and logistics. But when it came time to scale up to the next level of production, the team hit another roadblock they didn’t anticipate.

“We just couldn’t find someone to do what we were doing at the scale we needed,” said McDonald. “We had no idea what a huge challenge that would be.”

Luckily, Kombucha Cocktails was introduced to BevSource, a team of collaborative beverage innovators with the experience and connections they needed to produce Kombucha Cocktails at scale. “BevSource was on top of the requirements and timelines,” says Donovan. “They pushed things through and guided us along the way.”

That guidance was especially valuable during Kombucha Cocktail’s first major production run with a product that was the first of its kind and unfamiliar to most co-packers.

“BevSource was there to insulate us from eleventh-hour challenges,” says Donovan. “They played an important role in facilitating a solid relationship between us and the co-packing facility to serve the best interests of all parties involved.”

Kombucha Cocktails has already racked up some pretty big wins, including several awards for both their flavors and packaging. Despite regulations that prevent alcoholic products from making any health-related claims, the company has taken strategic steps to communicate the nature of the product, positioning it as “A way to enjoy a cocktail without disrupting the balance of living your best life.”

For Donovan, being able to share the product with people, as he was recently able to do at the 2022 Masters Tournament, is what has made the sometimes challenging journey worth it.

“To be able to hand people a smooth, well-crafted cocktail with an amazing ginger flavor and an invigorating carbonation, and knowing that it contains premium, non-artificial ingredients, that’s a pretty rewarding experience.”

What’s next for Kombucha Cocktails? The company remains focused on expanding distribution throughout Florida but is starting to study future markets including California and Illinois. Wherever they go next, they say they will leverage the insights they’ve gained and continue to collaborate with their partners, like BevSource, to get there.

“We didn’t realize how big of a challenge we were taking on until we got into it,” says Donovan. “We’ve learned so much, and we’re even more confident now that we can rely on BevSource’s team to streamline our logistics and help lower our cost of goods sold (COGS). All the details make such a big difference as you scale. It’s a relief to have an experienced team working together to make sure we don’t miss any of them.”