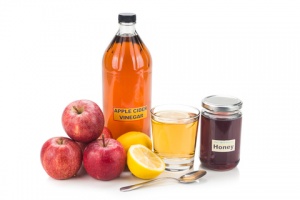 Thanks to the recent popularity of kombucha (a vinegar-y, fermented tea beverage), consumers’ palates are changing and vinegar-based drinks are increasing in popularity once again. Switchels, shrubs, and drinking vinegars are beginning to take up more space on grocery and liquor store shelves, and the vinegar-based drink industry is still wide-open for innovation, as it is a newer and growing market.

Switchel is a non-alcoholic and refreshing vinegar-based drink that is thought to have originated in the Caribbean. It was also a popular drink among farmers in the colonies during the 1700s, and was even given the nickname of “Haymaker’s Punch” because of this popularity. The drink is traditionally a mixture of water, vinegar, and ginger. Sometimes a sweetener such as honey, maple syrup, sugar, or molasses is added.

While the drink itself is non-alcoholic, it can also be used as a mixer in cocktails.  Although switchel may have fallen off the mainstream beverage map across most of the United States until recently, it has nearly always been a popular staple in Vermont and other areas of New England.

Creating your own switchel is a popular option, but more beverage companies are introducing their own pre-bottled switchel to be marketed as an alternative energy drink or cocktail mixer.

Shrubs are similar to switchels, but are generally presented in a more concentrated form. A shrub is a concentrated syrup that’s made by mixing vinegar (usually apple-cider vinegar), fruit, and sugar. Once the syrup is created, it can be diluted with water, sparkling water, or other mixers to be used in a cocktail or refreshing non-alcoholic beverage.  Shrubs are especially popular today among those who make craft cocktails and are looking to infuse more interesting flavors into their drinks.

There are also a wide variety of “drinking vinegars” and other vinegar-based beverages being marketed today. Because of the supposed probiotic benefits of apple cider vinegar, these vinegar-based drinks appeal to today’s demand for food and drinks that taste good and bring benefits for our bodies. Drinking vinegars can be found in a wide variety of flavors, generally flavored with fruits, herbs, and spices.

Switchel and shrubs can both be sold bottled as-is, or pre-mixed into a bottled or canned alcoholic beverage. However, because of limited public knowledge of these more traditional drinks, marketing may face challenges in consumer education until they reach more widespread popularity.